Wow! We had some tasty fajitas for an incredible value.

We LOVE Mexican food.  We've loved it before our only trip to Cozumel a few years ago and we now love it even more.  Fortunately we have several excellent Mexican restaurants close by.  One offers a Deluxe Fajita for Two for $18.95, about $20 with tax.

I have never seen a larger fajita skillet.  It was like a large pizza pan.  Fajitas for two?  More like fajitas for six!  Seriously! 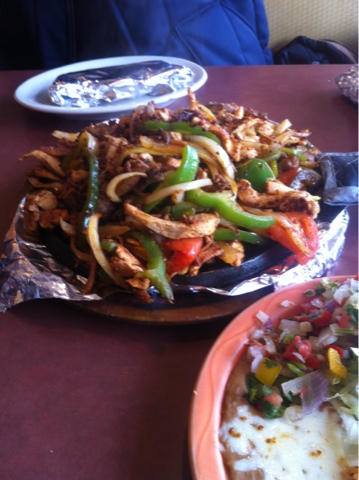 Sizziling on top of it was a mountain combination of chicken, chorizo sausage, pork, steak,  and shrimp on the side.  I'm allergic to shellfish.  My husband was fine doing without shrimp, but the server was gracious enough to offer his shrimp to be cooked and served separately.  Also included were the signature onions, peppers and tomatoes. Thankfully, the veggies were done just to our taste - crisp and not too soggy.

It was such a value, we got a total of 13 fajitas within three days.

I already had a package of 10 flour tortillas at home, which cost .99.  I also had some shredded cheese and other items to add to them.  We were able to make EIGHT fajitas at home with the leftovers for dinner last night and lunch today. 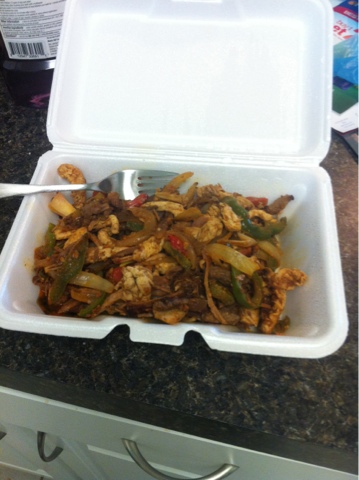 I'm quite surprised that we got so much for leftovers.  Yes, it looked big, but we were loading up our tortillas at the restaurant, especially my husband.  I had two, he had three. 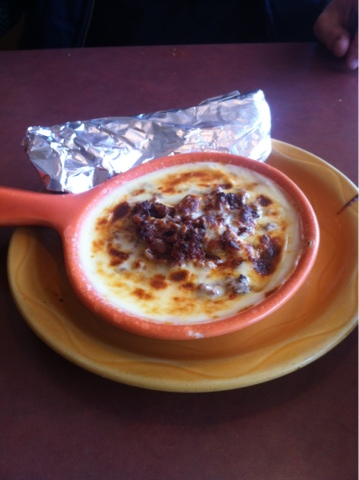 He admits that he may have been able to have one or two more fajitas at the restaurant if it wasn't for all the chips and salsa we had, plus the Queso Fundito con Chorizo - melted cheese with spicy sausage, served with soft flour tortillas.  It was so good, it should almost be illegal.

We told our server that this should be called fajitas for six.  He laughed, then told us of one customer who was a big guy, more tall and muscle than fat he says, ate a full order in one sitting, after a full basket of chips.  He then ordered fried ice cream for dessert.  Ohhhhhh my!