I don't know how to explain this mandatory appetizer at past family cookouts.  I'm calling this 'Hungarian Bruschetta' so most can get a quick concept:  crusty bread, fresh tomatoes and onions; but, instead of the delicious and popular Italian way of adding olive oil and perhaps a drizzle of balsamic vinegar, we did it a different way.  We did it with bacon. . . a special bacon.

Our family cookouts were an anticipated tradition.  On the West Side of Cleveland, under the summer flight paths of low planes landing into Hopkins Airport next to the Ford plant where Grandpa worked, across from the railroad tracks and the Chevy plant (now GM), behind the UAW hall, I grew up with the men in my family guarding the grill cooking the special Hungarian bacon to drizzle it onto the bread.

I wish I knew the exact name of this.  Since my great-grandparents and grandparents did not teach my mom or uncle Hungarian, my brother and I didn't learn it, either.  If I knew the exact spelling I'd tell you, but I've only heard its 'proper name' as "Giddush Kenya."  My family also calls it "Greasy Bread."  The Hungarian bacon we use was pronounced "Sul' en ah."  Basically, it's smoked salt pork, only better, in my opinion.

All grandparents have not been with us for a while.  Since they have been gone, having this appetizer has become rare, but often discussed when we are together bringing up past memories.

For the Fourth of July weekend, Mom and I decided it was time to bring it back.

It's a bit time consuming, as you can only serve one or two at a time.  And, sometimes it's best to make it with two or more people.  When we were young, our uncle manned the grill while my brother and I were the runners, serving the slices to the the rest of the family talking at the picnic or kitchen table.  We served in a hierarchical manner.  Grandma got hers first as the Matriarch and the chef who prepared everything.  The grandfathers got their bread next when they were with us, then Mom and Aunt, adult cousins, then the kid runners, then my uncle who enjoyed his slice or two last with the crispy cooked bacon on top as he loaded the grill with Kolbaz (Hungarian Sausage) for dinner.

My husband and I had my uncle and aunt over with my mom and brother for a steak bbq this past holiday weekend.  Only in a Hungarian home like ours do families anticipate Greasy Bread just as much as grilled steak, especially after seven years or more since we've had it.

I has happy to take over the honors of Grill Master this year, and my husband was my runner.  This was the first time he's tried it after hearing about it for years.  His eyes just about rolled back into his head as he swallowed and said "That's right up there with the Hit Parade of Life," his expression when he really likes something.

I was proud to give my uncle the first slice.  And the last.  And all the cooked bacon.

A 4 to 5 inch slab or 'brick' of salt pork or Hungarian bacon sliced in 1/4 to 1/2 inch slices.
Locals in the Cleveland area can find the kind that we have bought for years at Dohar Meats in the West Side Market (stands F1 and F2 in one of the corners).  Entertainment Book owners can almost always find one of their coupons.

12 slices of medium-sliced bread (Texas toast will be too thick, thin slices will be too soggy and messy).  Our favorites were crusty, fresh baked Italian and rye. 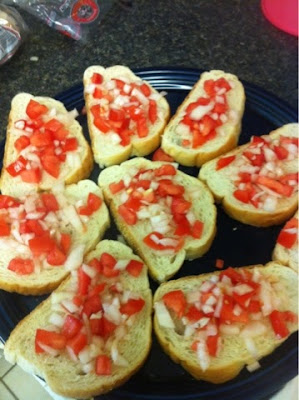 Toss onions and tomatoes with salt and spoon onto bread. 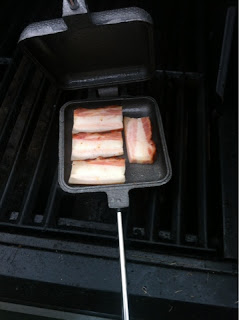 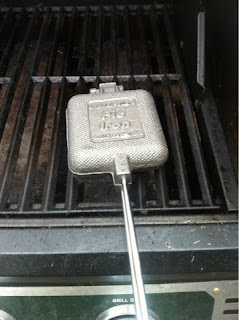 Add sliced bacon.  Four slices should be enough for 2-4 slices of bread, depending how much fat you want to drizzle on each one. 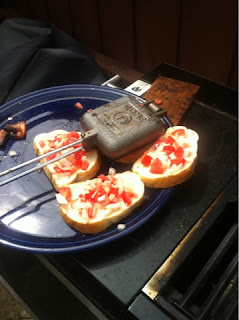 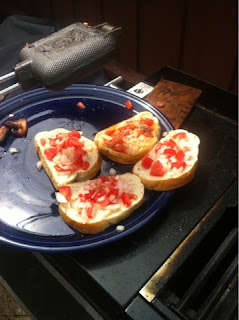 Once the bacon starts to sizzle and create drippings, carefully turn the iron sideways to drizzle onto the bread.  Then, press the hot iron down to heat through for about 10 seconds. 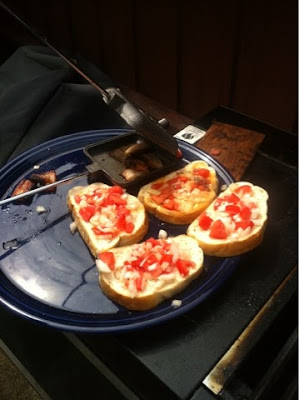 Release the bacon when it's crispy, charred and is producing no more drippings, then enjoy!
Posted by Unknown at 8:01 PM