Turkey Tacos and Beyond: Cook with Two Chicks' Taco Seasoning

I made fantastic tacos and quesadillas tonight, thanks to the authors of Cook with Two Chicks.  Kim and Carlinne have perfected their own secret recipe for taco seasoning which was a welcomed delight. 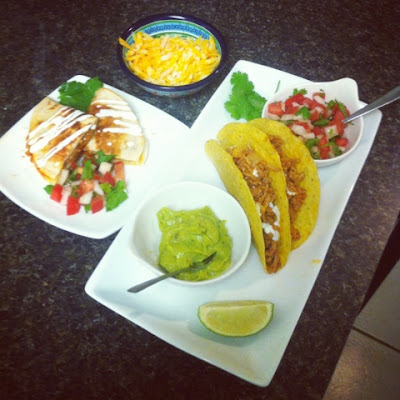 Their formula doesn't taste like the run-of-the-mill processed packet.  It's more authentically Mexican with a smoky flavor that is well-balanced with the other spices.  This seasoning is comparable to the tacos I've had in Cozumel and in my favorite Mexican restaurants.

Not only does their seasoning taste more authentic, it's by far less salty; a welcomed change for my taste buds as well as my blood pressure.

Please consider visiting their diverse blog.  Discover how to make cocktails with a certain kind of balsamic vinegar, a simple to enjoy quinoa in the summertime and book suggestions on what to read after your lunch under the sun.

Oh, and if you want to try their authentic tasting taco/Mexican seasoning, contact them HERE.

Thanks for reading, and thanks for visiting a couple of cool cookin' chicks. 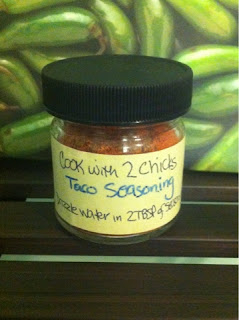 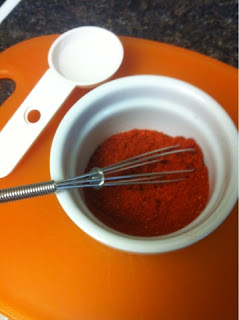 I met Maria at auditions for the school play in my Freshman year of high school.  She got a small role and we both volunteered for make-up crew.  The school was doing Dracula so we were excited with the ghoulish creativity we could discover.  We discovered we liked the new wave of British music in the early and mid 80s - Duran Duran, Sting,  New Order, as well as a deep respect for Queen, Pink Floyd, and the 80's U2.  Bod Geldof was our hero; the founder of Band Aid and Live Aid.  We both read his autobiography.  We became good friends quite quickly.

She lived close, so we carpooled for rehearsals.  I'll never forget the first time I was invited into Maria's home.  I knocked on her back door.  Her father opened the door with one hand and held a long, thin, meat carver's knife in the other.  He only had to lean down and over a few inches from where he was in the kitchen to the back door.  He was slicing meat off a large bone which I'd never seen before.

As he opened the door to let me in I said hello.  With a straight, but sincere face, wide eyes and friendly voice, he held out his knife straight to my face with a few chunks of meat, which did smell delicious, and said,

How could I refuse, especially with a knife in front of my face?

Actually, I wasn't that intimidated, with the lamb or Maria's father, especially with his welcoming smile and wide eyes. I  knew I was going to taste something wonderful.  I instantly loved lamb and Greek hospitality.  It reminded me much of the bare-bones sincere hospitality my family gave to long time friends.  Later in high school, her sister and my brother joined the theatre, music and arts crowd as well.  We, with a handful of others backstage became a tight group, often hanging at our house or Maria's house discussing the arts.

Through the years I remember when their mother was making a kitchen full of pans of baklava for the Festival: light, flaky phillo pastry with a walnut and honey filling for the annual festival on Memorial Day Weekend.  I fondly remember helping my friends and their parents pass trunk loads of baklava into the large kitchen packed with volunteers and trays of other Greek delights the night before.

My brother, our group of theatre friends and I enjoyed when Maria and Tina performed their traditional dances they've learned the through their church.  We'd cheer them on, get a juicy grilled souvlaki, sit on the steps of the church and wait until the parents have had their time socializing.  Souvlaki is a skewer  of chunks of pork marinated in lemon, garlic and oregano, grilled to perfection, served on a lightly grilled pita with onions, tomatoes, and tzatziki sauce (yogurt, cucumbers, garlic, lemon and dill).  My husband now looks forward to at least two at the festival and two to take home each year.

TheGreek Fests have not been the same without my close high school friends.  The family has since moved back to Crete and are all doing well.  I haven't been able to visit them since October of 2001, so it's been too long.

Until I can see them again someday I make it a point of going to the Greek Fest each year.  I'm happy to say I've shared my tradition with my husband and other friends and family through the years.  I need my Greek food fix, Greek music and dance, and the chance to spend time with family and friends, new and old.

My sister-in-law did it again.  She made another amazing meal.  She's quite the home chef herself.  Her talents are attributed to her fine dining and catering background as well as her family's long line of culinary talent.  She has the beat on the latest modern cuisine with a keen memory of tried and true family traditions.

She really outdid herself for our father's birthday.

I added in my baked beans by the request of my beloved new sister.  She was in charge of the well-balanced menu, so it was flattering that she had asked for one of my recipes to marry into the meal.

Here is the wonderful menu and photos:


For those who want fireworks in the sky and on the taste buds for the Summer, I highly recommend my series on Chef Eric William's menu selection in Maria Isabella's book, "In the Kitchen with Cleveland's Favorite Chefs."

Steak lovers and vegans alike will love these recipes for a fantastic vegan steak sauce which brings poultry or grilled veggies to an entirely new level.

Look at the results on her blog, then order her book to discover the secrets to this fantastic food.