Our Good Friday Dinner - More Than Eggs and Potatoes

It's probably not on anyone's Top 10 lists of favorite meals.  However, this Good Friday Dinner serves me extra flavor.

Potatoes and hard-boiled eggs have been our family's tradition since before I was born.  However, I remember peeled, boiled potatoes when we were younger; we then switched over to baked.  Grandma said that since Good Friday Dinner should be as plain and as simple as possible, baked were acceptable since it took less effort to prepare.

I remember not being too excited about Good Friday when I was very young.  It was as boring and as bland as the food we ate.  My brother and I weren't allowed to play during 12-3pm, and had to stay generally quiet and calm throughout the day. It was a difficult task when we were in the throes of starting a rock band with our Sesame Street figurines on an u-shaped, orange and brown plaid living room chair.  It was the perfect amphitheatre.  When school came around we spent most of the afternoon in Church praying the Stations of the Cross.  Then, we'd come home to boiled potatoes and boiled eggs.  And, at that time, I didn't like boiled eggs.

However, this meal did serve anticipation.  At least when dinner was done we were able to color eggs.  I loved coloring them, just not eating them.  That job was for the grown-ups on Easter, so I loved making the eggs as pretty as possible for them.  I remember being so excited to color them because Mom made such a big deal out of it.   She was so enthusiastic about each egg we made; each were a work of art to be praised, even if our experiments turned it brown or grey.  We felt as if we invented new colors.  Mom has always encouraged our creativity.

It wasn't until I was in jr.high when I started to appreciate this meal's extra ingredients.  My mom, brother and I had the privilege of moving in with my great-grandfather who lived down the street from my grandparents.  Mom was finishing practical nursing school at this time, then taking any shift available when she got hired.  So, there were many times when Grandma cooked for the six of us, especially on Good Friday, as she now took over the coloring and boiling lots of eggs.

I miss those times.  I miss the Good Friday Dinner with all of us.  I miss Grandpa and Great-Grandpa, both hard of hearing, sitting on opposite ends of the table shouting to each other about the Cleveland Indians.  They were usually in agreement with each other, it just sounded like they were arguing due to their shouting and frustration of the team in the 80's.

For the past few years, I've heated a few fish sticks in the oven for my husband, since he doesn't like boiled eggs.

I've kept to the standard - plain baked potato and boiled eggs - with a few dashes of pepper.

Each time I eat this I remember Good Friday.  My family is with me in each simple bite.

Posted by Unknown at 6:04 PM No comments:

Inspiration, Thanks to Maria

Before I go any further on this blog I must give credit to Maria isabella, author of "In The Kitchen with Cleveland's Favorite Chefs"

and, my brother for giving this book to me on Christmas.

I had already made Heather Haviland's  (Lucky's Cafe) Buttermilk Herb Biscuit recipe three times it was so easy, and a full batch is usually devoured within two days by just two of us.

I posted this photo in a food album on my Face Book page. When I made Paul Courtwright's (Shoreby Club) Smokin' Chicken Tacos with Roasted Vegetables, Cilantro Slaw and Mexican Rice, I was once again so proud of rockin' a new recipe I posted the photo into the album. 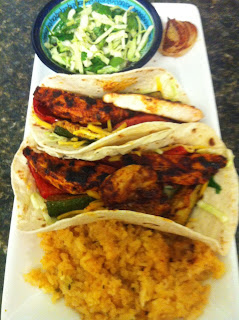 I was so excited about these four recipes.  I wanted to show the author how happy my husband and I are with her book.  I guessed correctly, and found the book's Face Book page, 'liked' it, and shared the taco and biscuit pics.

I was happy that the author, Maria, 'liked' the photos I posted.  I was surprised when she sent me a message asking for my email.  I was thrilled when she asked me to become her first guest blogger on her blog,  "Maria's Bits and Pieces."

She has already published my first post on the late Sergio Abramof's (Sergio's, Sarava') Shrimp Santos. My next post will be published within the next few weeks.  In the meantime, consider subscribing to her page to keep up to date with what our famous Cleveland chefs are doing, her public appearances, and her passion for food.

Also, consider becoming one of her guest bloggers yourself!  All you need is her book, a camera and enthusiasm for these easy recipes from award-winning chefs.

Though I don't have her book

(yet), I have made her authentic recipe four delicious times using this step-by-step breakdown.  Especially for someone who has never made this before, I'd recommend this site, especially because you can automatically customize the recipe by how many you need to serve.

And, especially if it's your first time making this, do yourself a favor - follow EACH STEP IN ORDER, and don't skimp.  Take the time and be proud that you are making a classic just the way Julia would want you to.  Splurge on a $10-$15 bottle of French wine, and fresh ingredients.  I used frozen pearl onions in my third creation, in order to save some time.  It was still excellent, but, I was spoiled with the flavor and texture the fresh onions offered.  My husband and I may not have known the difference if I had made it twice before with frozen onions, but we did.   On the fourth time, and probably the fifth to the 50th, I will schedule the added time to prepare fresh pearl onions and welcome the extra steps it takes.

Because of that slight alteration, we are happy that we have used the same wine each time. 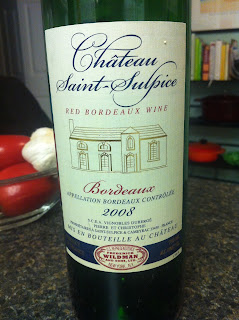 This isn't the suggested wine as no brands are specified; it's just the Bordeaux we used in my first go.  I am sure that any decent one will do.  However, the beauty and flavor of wine differs, even if it's a different Bordeaux.  I guess that the flavor will vary depending on brand and even vintage.  We may dare try another when I make it for the fifth time; but, for now, we are happy finding our 'signature' wine for our 'signature' flavor.

Try a Bordeaux (or similar) and stick with it to make your signature Boeuf, or, be daring and try a different wine each time.

I wish the photo of the meal looked as good as it tasted.  We had a dinner party for five with this meal, and we devoured a recipe made for eight. 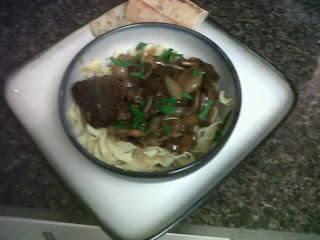 Posted by Unknown at 8:16 PM No comments:

I received Barefoot in Paris: Easy French Food You Can Make at Home for Christmas from my mother-in-law.  I had admired her vast cookbook collection including Garten's complete set.  This is my second Barefoot Contessa book she has given me.

I had never made French food.  I thought it was too complex for this fledgling kitchen cook.  To my delight I was surprised with how easy some of these recipes are.

The avocado salad was my first, and delicious attempt.  I love the ingredients separately, but,,,, together?  I never imagined what avocado and grapefruit would taste like - especially with Dijon!  I guessed that the avocado would taste good with a Dijon vinaigrette, but was a bit skeptical about Dijon on grapefruit. 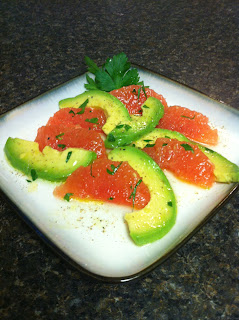 To my surprise, it was delightful!  The tart and slightly sweet grapefruit tasted wonderful with the extra kick of the Dijon, and the avocado mellowed those sharp tastes with its creaminess.

Plus, it looks extremely elegant and it is ridiculously easy.  This salad will be quite a hit at your next brunch or dinner party.  Find some traditional French music on internet radio, or play the Amelie Soundtrack

to really get you into the mood.
Posted by Unknown at 11:43 AM No comments:

I am a lucky soul for having found two passions in my so-called 'later life,'  cooking and true love.

I've always loved good food (who doesn't) and hosted occasional dinner parties in my 20s with a few easy, one-hit wonders I picked up from waiting tables fresh out of college.  I was far too busy in my career and social life to stay home to cook, or to settle down in a serious relationship.

It wasn't until my 30's when passions began to change.  I became my grandmother's live-in caretaker, where I had the opportunity to observe and help her make my childhood favorites - her Hungarian recipes and her version of classic favorites to the tunes of Big Band music on the oldies radio station.  Mom lived down the street from her, so I had the opportunity to appreciate and learn from her more than I did when I was a child, when I thought it was a simple, inherited trait to make food magically tasty by just waving a wand or 'mom' credentials.  Plus, the memories of the three of us rolling stuffed cabbage or making Christmas cookies are some of my most cherished experiences.  Learning the art of creating good food for those you love, with the ones you love had a profound impact on me.  It made me care more about what I was making, and more about those I was making it for.

Soon after Grandma had to go to a nursing facility, I happened to meet the love of my life.  Actually, we had already been friends for three years, and he has given accounts on remembering me in the 80's as a teen sipping a coffee on Coventry, the area in Cleveland Heights where many gather for coffee, music, art and great food.  I did feel like I knew this soul for years.  I felt the warm, connected feeling I did as I was cooking for others I loved.

I became so excited about cooking dinner for my new love.  We made it more fun by shopping together.  Then, I'd cook while he played music or read passages from his favorite books.   It was (and is) a beautiful way to share our love.

In our late 30s, we married.  It's been a fun and tasty journey that I am proud to share.

I look forward to sharing creations I've tried from my treasured cookbooks, ethnic traditions and classic favorites from my family, as well as my husband's.

Thanks for visiting!
Posted by Unknown at 6:53 PM No comments: