What a food-coma afternoon.  My family went to our Hungarian club's annual lunch at Sterle's Country House, the oldest and one of the last remaining restaurants in the area to serve Hungarian and Slovenian food.  Correct me if I'm wrong, but this is probably the last place in the area of this size where large families and groups of friends can gather at large tables, clank thick beer mugs together and dance the polka.  Our dues help pay for the dinner, so, we got all this for $10. 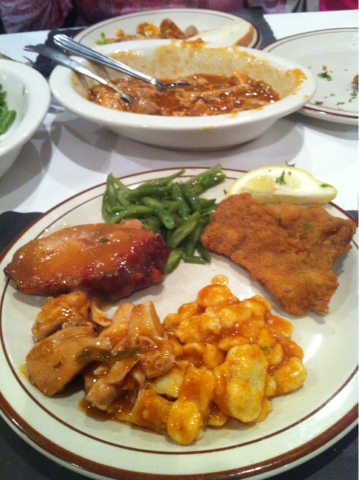 We had (from bottom, then clockwise) chicken paprikash, roasted pork with gravy, green beans and Weinerschnitzel (vee'-ner-shnit-zell), breaded and fried veal. 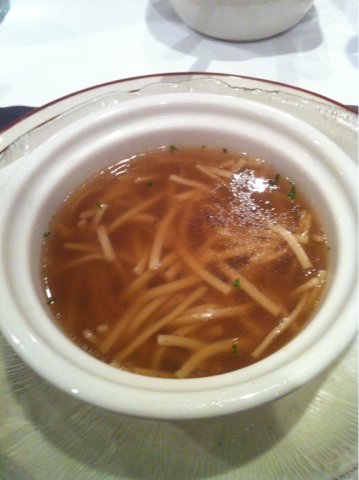 We started with noodle soup.  Since their new ownership, it looks and tastes different.  My brother didn't like it at all, but, my husband (a new member) had four bowls.  It used to look and taste like chicken noodle soup.  This looked and tasted like it was a combination of chicken and beef broth.  I had half a bowl; partly because I was saving room for the heavy-hitters, partly because it was not like I remembered it.  Some things change. 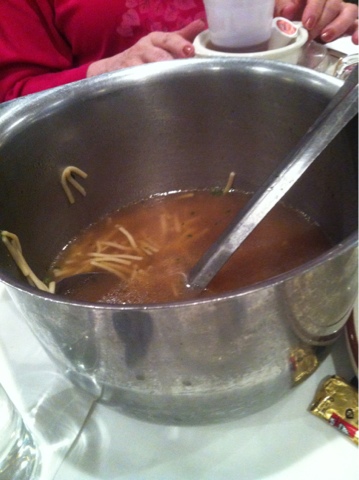 At least it's all still served 'family style,' with kettles of soup and large platters are set in the middle of the table to serve yourself, just like at home. 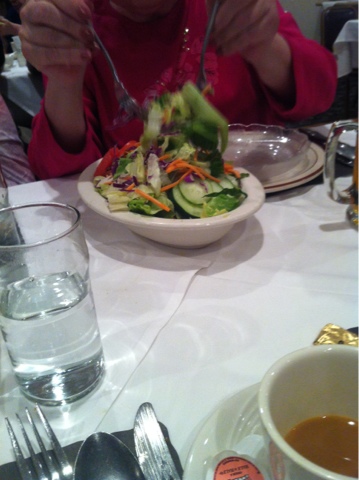 The club hosts a dinner in October as well at the same place in the private party room.

It wasn't always held here, and there used to be more events.  Actually, before there were 'events,' it was a lifestyle.  The club used to be an integral part of a tight community.

Our group, our heritage is specifically Sathmar.  In short, uncomplicated terms (hopefully), we are displaced Germans (due to Catholic beliefs) from the Black Forest region in the 16th century and settled in the Sathmar Schwab region of Hungary, (until it became part of Romania, near Transylvania after WW2).  And, I guess we weren't too popular with the resident Hungarians.  We were immigrants invading and buying their land, and working for cheap.  Some of the Sathmar Schwabs were too poor to even buy the cheap land that was available; they traveled, took odd jobs, or performed for food.  They became what can be considered gypsies.  My great-grandpa's family were farmers.  The Industrial Age lured many from that region to the US, most to Cleveland, Ohio to work for ACME.  My great-grandfather was one of them.  He was 13, and working in the field.  His parents approached him with a suitcase and a man from the village.  He was told that he was going with the man to the New Country and they had to go at that instant.

My great-grandfather was one of the founding members of the club in 1925.  He helped build the club's own large building close to their neighborhood church.  Sadly, the club sold that building in the '60s, so my brother and I have never been there.  The tight neighborhood scattered to varied suburbs.  Generations have been lost and some didn't carry on the tradition.  Membership has shrunk.  Even today, my mom and uncle savored telling us delightful stories of their time at the club.  I love hearing about it.  My uncle loved helping the ladies in the kitchen and watching the guys play pool, but, he got lots of extra bakery when he helped in the kitchen.  I have photos of he, my mom and their late cousin in traditional costume, waiting to dance on one of the club's two dance floors.  As soon as I find them they will be included in this post.

Back then in the 50s and 60s, they tell us they didn't go to restaurants.  They didn't go 'out' as we now know it.  They can remember the few times they went to McDonald's for 'special' occasions.   If they went 'out,' it was the whole family, and it was just a few blocks away at the club.  Ladies cooked and played cards.  Men played cards and shot pool.  Kids had much space and time to invent their own games and imaginary worlds if they weren't practicing traditional dance.  Some things change.

Now, less than a hundred of us meet twice a year for a meal.  It's sad to see a tradition fade, yet inspiring to be one of the few that are keeping it alive.

Yet, some things don't change.  We listened to fellow member Joe Jeromos play some Hungarian music along with polka and some tunes one would probably hear at a wedding.  Grandma and Grandpa had all of his vinyl records.  You can listen to him HERE. 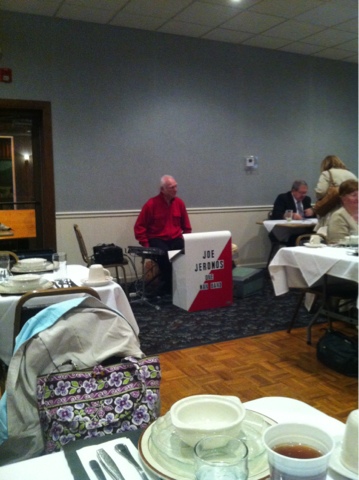 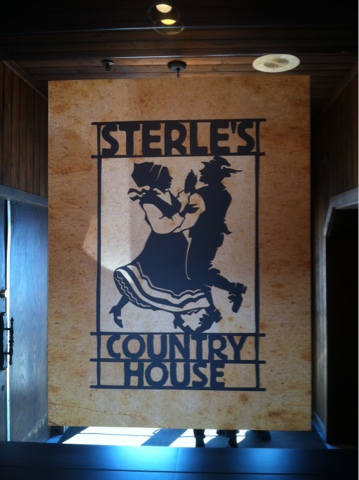 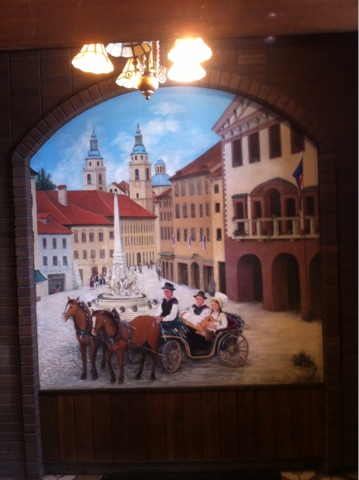 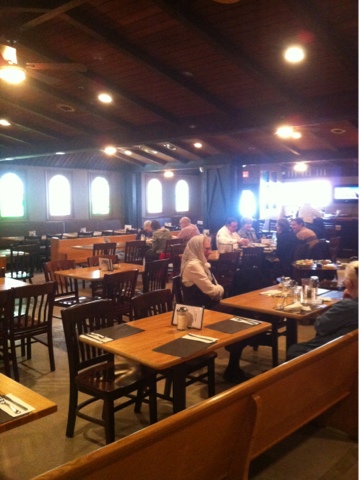