Barbecue Ribs in a Crock Pot

After this hard, cold winter I couldn't wait any longer for the summer flavor of barbecue.  I've never made ribs at home, even during the grilling season.  I've heard that ribs need to be boiled, smoked, tenderized ..... in short, too many steps to intimidate a home cook into driving to the nearest rib joint and placing an order. 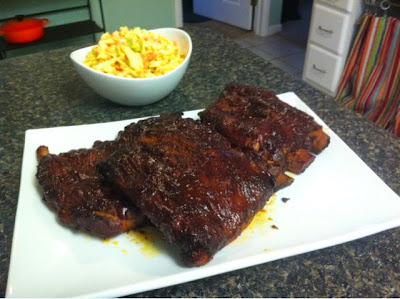 I was inspired by online posts of doing them in a crock pot.  Once again my slow cooker made magic.

I saw several rub recipes with a teaspoon of this, two teaspoons of that, but I didn't even get that complicated.  It was so simple, I don't need to write it up as a recipe - just a method.

Sprinkle salt, pepper, garlic powder, onion powder, cumin, smoked paprika and brown sugar on both sides.  I used a fork to rub the seasonings in rather than my hands.

Set the slow cooker on 4 hours.

Then place the ribs on foil-lined trays and put them in a 350 degree oven.  I had to be careful as the meat was already falling off the bone.  Baste with your favorite sauce and cook for 15 minutes for the sauce to bake in.

I plan on doing the crock method and using the grill to finish in summer.  Ribs will now be on the menu all four seasons in this household.