This Summer has been spectacular.  My husband and I have been busy attending fun events with family and friends such as museums, hikes, bike rides and swimming.  Outdoor concerts, like Ian Anderson performing "Thick as a Brick" and the Cleveland Orchestra performing Beethoven under the stars were particularly memorable.


Also, we had no choice but to adopt a kitten (about 6 months) who we found sleeping in one of our patio chairs.  We live in a rural area, where we often see feral cats wandering around and scoot away as soon as we go outside.  We just didn't have the heart to shoo a small kitten away who didn't want to leave.  He was too skinny, too hungry and too AFFECTIONATE.  After two flea baths and a clean bill of health from the vet we let him inside.  The poor little guy went straight to a fuzzy folded blanket on the sofa and slept for a full 12 hours.  It was probably his first comfortable, stress free day where he was able to truly relax.  Thankfully, he and our other two cats all get along quite well, and the little guy has NEVER tried to sneak out of an open door.  It's as if he was born to be an inside cat, or is just grateful to be indoors.   It's been two months.  He's almost doubled in size, but is even more gentle and lovable.  We couldn't have asked for a better feline to show up at our front door. 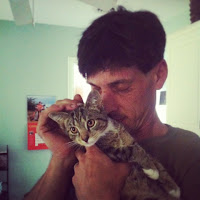 It's a small wonder that I had time to tend to my small deck garden.  The weather here was a bit funky.  It rained a lot in June and July, dry in August and September, and never got 'warm' enough.  Personally, I can't complain about the temperature, since it afforded me more time outside and cheaper electric bills from less air conditioning.

This is one of my favorite times of the year.  In simple terms, it's the time when I can make stuff from the stuff I've been growing for a few months.  It's a sense of accomplishment.  I love making favorites like homemade marinara, caprese salad and fresh pico de gallo.


I also went beyond my comfort zone and made an Asian-inspired dish.  I marinated chicken breasts in sesame oil, garlic, ginger and rice vinegar.  I stir-fried a few fresh peppers, onion, and water chestnuts in garlic and sesame oil, stir-fried the chicken, then tossed with cooked soba noodles, soy sauce and cilantro.  BIG HIT. 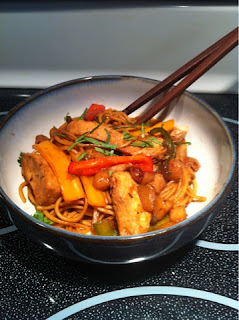 Plus, our recent plans for an upcoming vacation in Cozumel has inspired me to finish seasoning my molcajete and make a few other tasty experiments, such as making guacamole the traditional way and a favorite sauce that tastes almost as good as the restaurant where I first tasted it.  Next time ... 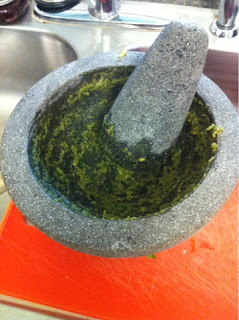